About a year ago I rather rashly offered to make my sister’s wedding cake. Not completely rash – I hear some of you cry – ’tis only a matter of fruit cake and royal icing! Indeed, but the cake I was so casually accepting to create was to be make entirely of macarons. Multi-coloured macarons. Ah.

I can do bread. I can do quite complicated bread like sourdough and proper pain de campagne but I’ve never quite had the same knack for sweet things. So why I had let myself in for this became increasingly baffling, especially when you consider that my kitchen isn’t exactly built for hardcore confectionery – we have a workspace of about 60cm and that is about it. I had attempted to make these fiendish French fancy almond meringues before with varying degrees of success – some looked like strange alien shells of goo and other almost looked like the ones in the pictures. Once Mum and I went hell-for-leather and tried to make pistachio ones but quickly realised we should possibly master the standard almond versions first. The strange green gunge that we created was delicious however. I needed to find a recipe that worked and that I could rely upon ( and also it had to work in ovens other than mine as the chances were that I wouldn’t be making them at home) so I trawled through a variety of books and magazines to see if there was one I could get to grips with. People very kindly gave advice (and occasional reading material) – don’t use baking parchment, don’t use French meringue, keep the oven door slightly open during cooking, don’t even bother trying because you’ll go mad – and I very diligently investigated the truths or non-truths behind their claims. The Italian meringue version almost worked but the piping was wrong, the silicone baking sheet was the right size but the mix was wrong, the mix was right but the cooking time and oven temperature weren’t. Ad infinitum.

However, eventually, the research paid off and I decided to ignore the anti-French meringue crowd (not because Italian meringue is rubbish, but because I haven’t got the space to pour sugar syrup into egg-whites) and found a recipe that seemed to work every time (or almost every time). The recipe itself is simple and doesn’t try to overcomplicate the process (some of the versions I’d tried before required nearly a day to prepare the kitchen) but, more importantly, it works on mix consistency, oven temperature, and cooking time. It can also be scaled down to make smaller batches – something that became essential when practising. I also quickly learnt that doing one batch at a time was paramount as any lower down in the oven did not bake properly, and that the ‘rest’ time should be as long as possible otherwise the shells don’t rise to create a proper ‘foot’.

All good and jolly.

And some of the ones we made when practising were, even if I say so myself, quite jolly. 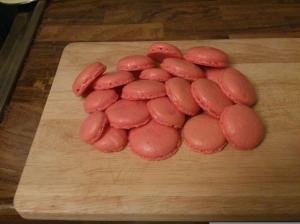 As the months went by and the date drew nearer I decided to go to Mum’s and try a batch in her oven to see if I could get the same results. One thing I had noticed when making them at home was that I usually lost about 20% to either breaking or sticking to the tray (silicone sheet or baking parchment seemingly making no difference here except in saving on washing up) and I’d read somewhere that you shouldn’t try and pull the baked macaroons off but gently release them using a palette knife. I don’t own a palette knife – we use a cheese-slicer with excellent results – but I mentioned this to Mum as something to consider when making them en masse.

We made a quick batch – only a small one. And every. Single. One. Was. Perfect.

That had never happened before.

We’d even used multiple trays in the oven.

I went home and mused on this and made a small batch myself.

And they all went hilariously wrong.

Mum rang to say she’d made a second lot using the same trays and multiple cooking and had had the same success as before and thus the venue for our big bake was settled. I have to admit, I was a bit worried about trying to transport around 130 macaroons using the tube and train network so making them in a kitchen that is only a short drive from the wedding venue was always going to be a plus.

And so, a couple of days ago, I packed my piping nozzle and white chocolate filling (pre-bought I have to confess – there won’t be much time for fancy fillings the day before the wedding) and headed home….