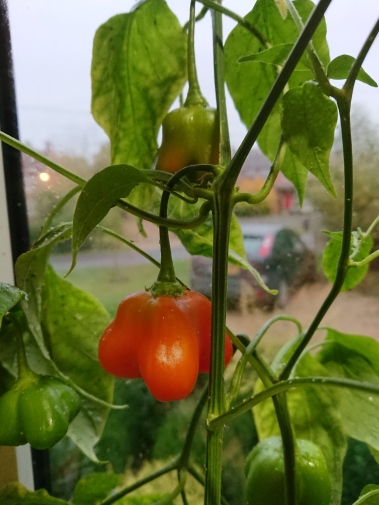 I ran out of Frank’s Hot Sauce recently. This made me rather sad but as I had a pretty healthy stock of firey and delicious condiments at my disposal (including the superb ‘Holy F**k’ offering from The Rib Man) I reasoned that I was fine for a goodly while. However, there were more and more occasions when the sort of sauce I craved was of the Frank’s variety and quite frankly (see what I did there?) nothing else would do. And my tabasco was also running low. Obviously I could have popped out and simply bought some more of my required delight but I wondered if it was possible to recreate something similar at home with the last of my crop of chillies. A quick scan of the internet revealed a goodly number of so-called ‘copycat’ recipes and so I decided to go for it and used a combination of two or three. However I didn’t have the 18 cayenne chillies specified so I used a heady mix of (annoying mild) Scotch Bonnets, cayennes, jalapenos, and a dried habanero just for larks. The results were pretty awesome I have to say – hot, pleasingly zingy, addictive – and the recipe itself was actually pretty simple so it will be easy to restock when I need to. I didn’t bother taking the seeds out but if you want the exact consistency of the legendary Frank’s then you can deseed the chillies first or pass the mixture through a sieve after cooking. If you have an extractor fan in your kitchen then this will be most beneficial.