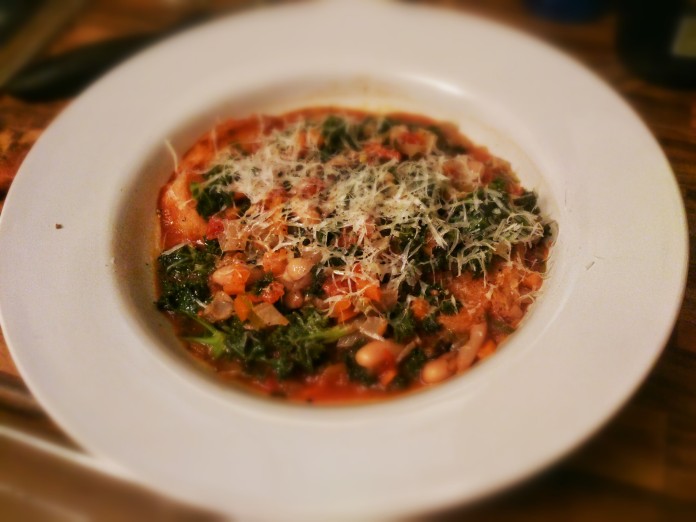 I was tempted to call this post ‘Possibly the best soup ever’ simply because it gives me so much joy every time I eat it. One of the many wonderful things about this recipe is that, unlike many so-called ‘meal’ soups, this really does fill you up in a truly satisfying way. No jokes – it really does. It is also perfect for cold nights and for when you need to make a change from seasonal excesses.

The first time I encountered a ribollita (Italian for ‘re-boiled’) was in an early episode of the ‘River Cottage’ series in which the ever dependable Hugh Fearnley-Whittingstall created a version that he dubbed ‘Half-the-garden Soup’. It certainly did contain a fair heft of veg and I was slightly disappointed not to find a recipe for it in the original (and excellent) ‘River Cottage Cookbook’. The version that eventually appeared in the (also excellent) ‘River Cottage: Veg Everyday’ cookbook was splendid and tasty but for some reason didn’t quite fulfil the warming, wholesome temptation that the original TV series seemed to offer. No matter, there were many other ‘hefty’ soups in the book and I was soon distracted and not musing too much on the lack of ribollita in my life.

However, the thought of a filling, simple, delicious vegetable soup that delivered a bit more punch than usual kept coming back to me. So I turned to the internet to see if any variations existed and lo and behold, Hugh himself provided the answer! One of his weekly columns for The Guardian was based around tinned ingredients and, much to my delight, the first recipe he offered was for a ribollita. Joy! And so, on a cold autumn night, I gave it a go and the results were, well, more than stupendous.

Seriously – this soup is something else.

So excited was I by the success of the ribollita that I made it again the following week.

And again a few days later.

And I made it for dinner last night.

And we’ve got more for dinner tonight.

I’ve tried to work out what makes this recipe superior to the version in the book and the only thing I can really spot is the addition of wine. Wine generally makes things better in my book and you’d have thought that perhaps 100ml wouldn’t make much difference but believe me, it is the difference! The other elements that really help this soup pack a serious punch are the slow cooking of the onions (15 minutes) and then the simmer of the whole soup (about an hour). This may seem like a bit of a faff time-wise but I implore you to be patient and go with it – I’ve tried doing a faster version and it just doesn’t satisfy.

You could use the time to drink more wine for example.

The only I’ve changed from the original recipe it the amount of olive oil used to soften the veg – I find that 2tbsp is more than enough – but use however much or little as you please. Again, the oil is a key part of the flavour so don’t leave it out entirely as you will miss it. The soup does taste better when left overnight but you might need to add more stock as the liquid does tend to get absorbed by the veg.

The recipe states it will serve six to eight people however, we are greedy and find really we only get four big portions from this quantity!

In a large saucepan, warm the olive oil and sauté the onions over a medium-low heat. Cook them for a good 15 minutes, stirring occasionally, until they are soft and glistening.

Add the carrots, celery and leek, and cook for a further five minutes, stirring and then add the garlic and stir for another minute.

Pour in the wine and simmer for a minute – this makes everything SO much better. Add the tomatoes, beans, stock, rosemary and thyme, season and simmer gently, partially covered, for about an hour.

Use this time to drink wine.

Add the greens and cook for 10 minutes more. Remove the herb bundle and season to taste.

Once the soup is done, rub the bread with garlic, brush with oil and toast until golden and delicious.

Put one slice in the base of each bowl, ladle over the soup, and shave over a healthy amount of parmesan. If you like, splash a bit more olive oil over the steamy pile of warming delight and tuck in.